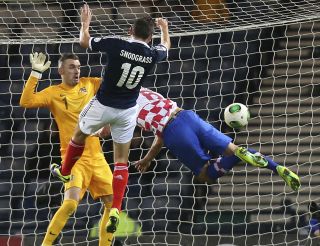 The Norwich forward had joined up with the squad late after his partner gave birth to daughter Leonie last week, but he showed no signs of tiredness as he rose highest to head home the game's opening goal in the 28th minute.

Steven Naismith grabbed Scotland's second with 17 minutes left, netting the rebound after Barry Bannan's penalty had been saved to wrap up the win for Gordon Strachan’s fast-improving side.

The win meant that Scotland leapfrogged Wales, held in Belgium, into fourth place in Group A, while Croatia finished in second to take one of the eight play-of places on offer.

Strachan made three changes from the side that won 2-1 in Macedonia last time out, bringing in Allan McGregor, James Morrison and Snodgrass for David Marshall, Steven Whittaker and Shaun Maloney.

Croatia manager Igor Stimac, meanwhile, made four changes to the side that lost 2-1 in Belgium on Friday, including captain Darijo Srna, who returned from suspension. QPR midfielder Niko Kranjcar, who came off the bench to score against Belgium, was also among the inclusions.

The visitors started much the better side and their early pressure was nearly converted into a goal 12 minutes in, but former Blackburn Rovers striker Nikola Kalinic just failed to get on the end of an excellent Srna cross.

Scotland's first chance fell to Naismith, but the Everton man shot over from 18 yards after Scott Brown's initial effort had been blocked.

Strachan's men improved as the half went on and they took a deserved lead after 28 minutes when Snodgrass, scorer of the winner last time these sides met, leapt above Vedran Corluka to head home Charlie Mulgrew's cross.

And the Norwich City striker nearly grabbed a second a few minutes later when Brown slipped the ball into his path as he raced through on goal, but Croatia goalkeeper Stipe Pletikosa  made an excellent save down to his left.

Mario Mandzukic had a chance to equalise shortly before half-time but he volleyed into the ground and over the crossbar when another Srna cross found him free at the back post.

The second half was a scrappier affair with few chances, Luka Modric's long shot, which McGregor saved easily, the only one of note.

The Croatia fans responded to the lull in incident with some entertainment of their own, letting off a series of flares which left the pitch covered in smoke.

Stimac brought on Eduardo for Kalinic in search of some inspiration with time running out and he almost provided it when he latched onto a throughball and rounded McGregor, but the former Arsenal man finished into the side-netting from a tough angle.

And Scotland punished that profligacy soon afterwards when the dangerous Ikechi Anya was felled by Domagoj Vida inside the area.

Bannan's penalty was saved well by Pletikosa initially, but Naismith reacted quickest to fire home and seal the victory for Strachan's side.