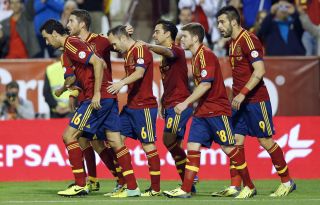 The world champions went into the match needing only a point to finish ahead of France, but they never looked like dropping points and Alvaro Negredo scored the 200th goal of Vicente del Bosque's spell in charge.

Georgia were under pressure for almost all of the match and substitute Juan Mata secured the win for Spain just after the hour mark, extending Del Bosque's unbeaten run in competitive home matches to 13.

The Spain coach made six changes from the narrow 2-1 win over Belarus on Friday, including returns for Iker Casillas and Andres Iniesta, while Alberto Moreno made his debut at left-back.

And the hosts dominated proceedings early on, with Negredo going close on two occasions in the first 25 minutes as he shot straight at the goalkeeper from close range and then saw his overhead kick tipped over the crossbar.

Negredo's persistence paid off eventually, however. Iniesta, playing in his home town of Albacete, got to the byline and played a low pass into the danger area which Negredo clipped home.

Georgia should have equalised a few minutes later as Casillas parried Tornike Okriashvili's shot into the path of Nikoloz Gelashvili, but the forward fired over the open goal.

Luck was on Georgia's side just before half-time when Negredo hit the post from close range, and Guram Kashia was there to clear his resulting header off the line.

Unsurprisingly, Spain's superiority continued into the second half, but they found the Georgia defence tougher to break down initially before eventually doubling their lead.

Aleksander Amisulashvili attempted to clear a cross from the left, but he headed the ball straight at Gerard Pique and Mata lashed the ball into the bottom corner, three minutes after coming on.

With 22 minutes to play, Iniesta would still have been hopeful of getting a goal of his own and he produced a good effort with his left foot that was deflected over.

Mata was also finding space and he nearly set Navas up in the 72nd minute with a low cross to the back post, but the Manchester City forward was crucially tackled at the vital moment.

Local boy Iniesta went off to a standing ovation in the final stages and although the hosts pressed for more goals, ultimately they settled for a two-goal win as they booked their passage to the finals in Brazil next year.