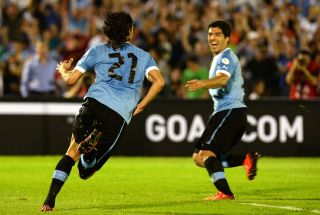 Oscar Tabarez's side missed the opportunity to climb into the top four of the CONMEBOL section when they lost 1-0 to Ecuador last Friday, and that result means they head into Tuesday's game against the pool winners with only the faintest chance of automatic qualification.

Uruguay, who are already guaranteed to at least go into an intercontinental play-off by virtue of finishing fifth, must defeat Argentina convincingly while also hoping one of Chile and Ecuador - placed third and fourth respectively - win their meeting in Santiago handsomely.

The 2011 Copa America winners also had to rely on the play-off route to the 2010 finals, when they beat Costa Rica 2-1 over two legs.

Uruguay went on to reach the semi-finals in South Africa, and Tabarez has resigned himself to his side once again having to do things the hard way against Jordan, who beat Uzbekistan in their Asian play-off to reach the intercontinental stage.

"We've been putting information together because we recently saw that it was most probably we'd be going to Jordan," said the coach.

"There's nothing impossible in football, but also there aren't things which escape all logic."

Uruguay are sure to look to Luis Suarez for inspiration against their old rivals in Montevideo, with the Liverpool forward having scored 10 goals in qualifying so far.

That tally puts him joint top of the South American scoring charts with Argentina captain Lionel Messi, who will miss the clash due to a hamstring injury.

Napoli striker Gonzalo Higuain - who has been in superb form for Argentina throughout the campaign, scoring nine goals in 11 games - is also sidelined with a calf problem.

Midfielders Javier Mascherano and Fernando Gago are also both absent, with Argentina boss Alejandro Sabella likely to give some of his squad players an opportunity to impress after Friday's 3-1 victory over Peru.

Uruguay have no new injury worries ahead of the encounter, but 14 of their squad, including Edinson Cavani and Maxi Pereira, are walking a disciplinary tightrope with being just one booking away from missing their next competitive fixture - likely to be the first leg against Jordan - through suspension.

Tabarez's side will be confident of avoiding defeat at the Estadio Centenario, as they have not lost any of their seven home qualifiers during the campaign.

However, Argentina were the last team to beat them on their own patch in qualifying, as Mario Bolatti’s late goal was enough for a 1-0 success in October 2009.