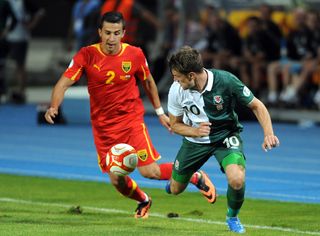 Coleman will be without 10 players originally selected in his 23-man squad for the FIFA World Cup qualifying match, including Real Madrid forward Gareth Bale and captain Ashley Williams, who have been ruled out with thigh and ankle injuries respectively.

They join the likes of Joe Ledley, Joe Allen and Andrew Crofts on the sidelines although Coleman has been able to reach an agreement for defender James Collins to join up with the squad.

The West Ham defender had disputed suggestions that he refused a call-up in September and links up with the squad, while Liverpool's 16-year-old midfielder Harry Wilson has also been selected.

Established figures Aaron Ramsay and Sam Vokes both missed training on Tuesday and may be doubt, while lloyd Isgrove, Danny Alfei, James Wilson and Rhoys Wiggins could all make their international debuts.

The fixture sees sixth take on fifth, as both sides seek to avoid finishing bottom of the pile, with Coleman's charges going into the game having lost their last three matches in Group A.

Macedonia are just a point better off than their opponents, sitting in fifth thanks to a draw against Scotland last year.

As well as their lengthening injury list, Wales have also been hit with the news that experienced campaigner Craig Bellamy is to retire after the qualifiers against Macedonia and Belgium.

The 34-year-old Cardiff City forward believes that, despite a disappointing campaign this time around, Wales can become a potent force in international football, provided they can keep their top players fit.

And he is willing to step aside to give those prospects a chance.

"The quality of players we have, this is not like other teams down the years," he said.

"We have to get out of that routine of being poor old Wales. Even today people are saying we are unlucky. I am fed up with it."

Macedonia will look to do the double over Coleman's side in the Welsh capital, having won the previous meeting 2-1 in Skopje thanks to an Aleksandar Trajkovski goal 10 minutes from time.

While Cedomir Janevski's side face a winnable tie in their final qualifier, taking on a Serbia side that have won just two of their last seven qualifiers, Friday's game may be Wales' last realistic chance of picking up points and moving off the bottom.

Coleman takes his squad to Brussels on Tuesday to face leaders Belgium, who have taken 22 points from a possible 24.