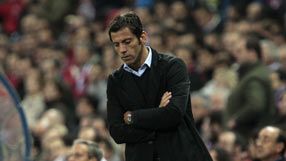 The Spanish football federation punished him with one game for receiving a straight red card and another for his unruly behaviour, the ruling body said in a statement on its website.

Sanchez Flores raced to the touchline to confront Espanyol midfielder Javi Lopez for what he saw as time-wasting and a lack of respect and clashed with opposing captain Luis Garcia before being dismissed from the bench.

He had to be restrained by Espanyol goalkeeper Carlos Kameni and other players and officials when he tried to confront Garcia again after the final whistle.