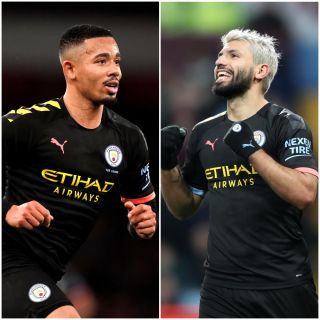 Manchester City boss Pep Guardiola named both Sergio Aguero and Gabriel Jesus in his starting line-up for first time in a Premier League match since September 2018 against Aston Villa on Sunday.

It is something the Spaniard might decide to do more often after the South American pair scored four of City’s goals between them in a 6-1 victory, with Aguero writing his name into the record books with a hat-trick.

Here, the PA news agency takes a closer look at how the strike duo performed at Villa Park.

Here's how we line up at Villa Park this afternoon…👇— Manchester City (@ManCity) January 12, 2020

Guardiola’s teams have played some of the most beautiful football ever seen and the former Barcelona and Bayern Munich boss has proved himself to be one of the most innovative coaches around, but sometimes when push comes to shove even he is not afraid to go old school and play 4-4-2.
City started the match that way to help accommodate Aguero and Jesus, although it was a loose formation when they attacked with all the forward players fluidly switching positions.

Pep Guardiola explained to Sky Sports before kick-off: “We know they play five at the back so we put one more player close to the box to try and score goals.
“We’ll play as normal. We’ll try to press hard, to play in their half, to try and pass the ball and score goals.”

Aguero looked very sharp and often dropped deep to help build attacks, with Jesus being in the team allowing him to do that. When the Argentinian came towards the ball, Jesus moved into a more out-and-out striker role. The understanding between the two of them was good.
City’s opening goal came as a result of Aguero dropping deep to link up the play, creating space in behind for Kevin De Bruyne and goalscorer Riyad Mahrez to exploit.

Both Aguero and Jesus got their names on the scoresheet. Aguero’s hat-trick saw him overtake Thierry Henry as the Premier League’s leading overseas scorer, taking his tally to 177 goals in 255 matches and achieving the feat in three fewer games. Aguero has also now scored the most Premier League hat-tricks, with his 12th treble taking him one clear of Alan Shearer.

Jesus put City 4-0 in front just before half-time. De Bruyne attacked down the right and whipped in a brilliant cross behind the Villa defence, putting the ball on plate for the Brazilian to tap in his 14th goal of the season.

Both Aguero and Jesus could have added to their tallies but a combination of wayward shooting and a couple of decent saves by Orjan Nyland prevented a more emphatic scoreline.