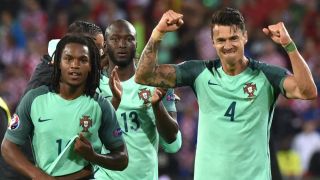 Sanches scored the equaliser that cancelled out Robert Lewandowski's opener for Poland in the Euro 2016 quarter-finals, before stepping up to coolly slot Portugal's second penalty in a 5-3 shoot-out win on Thursday.

The former Benfica attacker was heavily linked to United before Bayern Munich swooped in to snatch the 18-year-old from under the noses of the English heavyweights, a transfer gaffe that they may come to regret according to Fonte.

Bayern stumped up an initial €35million to capture Sanches, who signed a five-year contract in a deal that could see the fee rise to €80m.

"Being a Premier League player, for me, they missed out on a very good talent," Fonte said.

"He's a nice kid, he listens to the old guys, he wants to learn, which is good. It's great to have him around and he'll be the future of the national side for sure."

Fonte said he was impressed with Sanches' maturity on the field.

"He's got no fear. He just doesn't care. He goes and asks for the ball every second," he continued.

"He's got power and strength, energy to run all day and great ability.

"It is lucky for Bayern Munich that they have him."