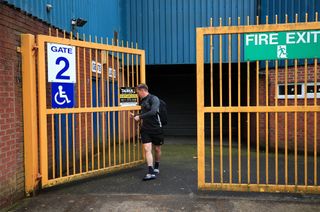 Bury have lost their English Football League membership after failing to prove to the EFL they have the means to pay their debts.

Here, the PA news agency looks at other clubs which folded.

Resignations from the league had been reasonably commonplace prior to the Second World War but Accrington’s was headline news. The original Accrington Stanley were members of the Football League between 1921 and 1962. Financial difficulties caused by the purchase of a new stand plunged them into severe trouble and they resigned from the Football League in March 1962 after a last-gasp rescue bid was rejected. The club spent four seasons in non-league before being disbanded. Stanley were reformed in their current guise in 1968.

The last ever goal in the Football League for Aldershot FC. Scored by Tony Joyce on 7th March 1992 in a 4-1 home defeat versus Northampton Town. pic.twitter.com/U88WrX8mW9— Aldershot Attic (@shotsremembered) August 7, 2019

Founded in 1926, Aldershot FC were elected to the Football League in 1932 and stayed there until they went out of business on March 25, 1992 and had to resign from the league. The club had been in serious financial trouble for several years and mounting debts eventually became too much. Aldershot Town were founded immediately and competed in the league between 2008 and 2013, and are currently in the National League.

#OTD in 1989: Maidstone United win the GM Vauxhall Conference to clinch promotion to Division 4 for the first time. pic.twitter.com/RViXRhhCOR— When Football Was Better (@FootballInT80s) May 1, 2016

Maidstone United became Football League members in 1989 but had spent outside their means in order to get there and, with their ground not up to scratch, they had to play at Dartford. The purchase of land in Maidstone backfired when planning permission for a new stadium was rejected and the club were liquidated on August 17, 1992 following the postponement of their first match of the season. A reformed club currently plays in National League South.

Maidstone were the last club to go out of business while in the Football League but a number of former league clubs have folded since including Darlington, Rushden and Diamonds, Hereford United and Chester City. The latter were relegated from League Two in 2009 and wound up less than a year later in March 2010.