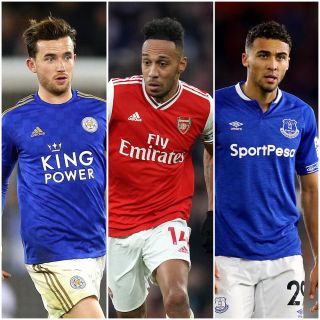 Dominic Calvert-Lewin is expected to sign a new five-year deal to stay at Everton, The Daily Telegraph reports. The in-form striker has scored three goals in two games under new manager Carlo Ancelotti, and despite keen interest from Manchester United, is set to sign a new and improved deal to keep him with the Toffees.

Inter Milan are in contention to sign Arsenal striker Pierre-Emerick Aubameyang, the Daily Mirror reports. The paper says the 30-year-old Gabon international is likely to leave the Gunners at the end of the season, saying he wants to join a club with better trophy-winning potential. Inter have made their interest known, joining a list of potential suitors headed by Barcelona.

Inter are also keen on Chelsea left-back Emerson Palmieri, according to The Independent. The Serie A club are set to offer £25million for the 25-year-old Italy defender, who has also drawn interest from Juventus. Palmieri has fallen out of favour under Frank Lampard, but a January move will depend on whether Chelsea can secure a replacement in time.

Juventus are poised to extend Cristiano Ronaldo‘s contract until 2023, which would keep him at the club until he is 38, according to Corriere dello Sport. Ronaldo believes he will still be a force at that age, and is waiting for confirmation of an extension to a contract which currently brings him a reported £30million per season in wages.

Chelsea and Manchester City are set to battle for the signature of Leicester defender Ben Chilwell, the i reports. The 23-year-old has been a star for the Foxes in the past two seasons, earning a berth as England’s regular left-back. Leicester, however, have no intention of letting Chilwell go in January.

Desperate Arsenal could be forced to turn to William Saliba https://t.co/TIxHUIB44upic.twitter.com/NrnrMiQDFF— The Sun Football ⚽ (@TheSunFootball) December 31, 2019

Patrick Roberts: Manchester City might switch his loan spell from Norwich to Championship side Middlesbrough because of a lack of appearances, the Daily Mail says.

Granit Xhaka: Hertha Berlin have agreed a loan deal for the Arsenal midfielder, The Independent reports.