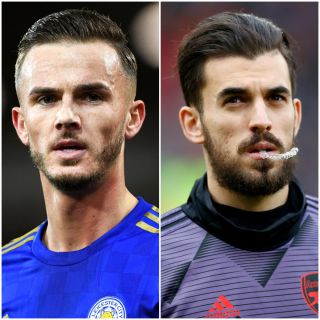 Jack Grealish‘s recent off-field trouble may turn out to be a positive for James Maddison, according to the Daily Star. The paper says Manchester United had been prepared to pay up to  £70million for Aston Villa captain Grealish, 24, but after his recent indiscretion the club may attempt to sign 23-year-old England midfielder Maddison from Leicester instead.

The Daily Express cites Estadio Deportivo as reporting on-loan Arsenal midfielder Dani Ceballos would prefer to return to Real Betis than remain in north London if he is not wanted at parent club Real Madrid. The 23-year-old is happy to leave the Emirates Stadium despite having impressed in 24 appearances for the Gunners. Ceballos originally moved to Arsenal on a 12-month deal.

Liverpool are not interested in re-signing Philippe Coutinho and bringing him back to Anfield, the Daily Mirror reports. The Brazil midfielder is currently on loan at Bayern Munich from Barcelona yet neither club is interested in his services, with the LaLiga side promising to let him go when football starts again. The 27-year-old played with Liverpool from 2013 to 2018 but the paper reports his advisors have been rebuffed by Anfield bosses. Manchester United and Tottenham, however, have been keenly watching the midfielder.

Willian: The 31-year-old Brazil midfielder wants to stay in the Premier League if he leaves Chelsea, with ESPN Brazil reporting Arsenal and Tottenham are interested in his signature.

Dejan Lovren: Tottenham, West Ham and Arsenal are all interested in Liverpool’s 30-year-old Croatia defender, according to Teamtalk.