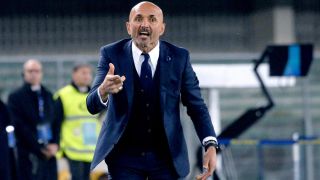 Luciano Spalletti has challenged his record-breaking Inter side to continue "looking forward" in order to keep pace with Serie A's title contenders.

The Nerazzurri maintained their unbeaten start with a hard-earned 2-1 victory away to Verona on Monday, improving the team's record to nine wins in 11 league matches.

Borja Valero and Ivan Perisic scored either side of half-time to see off the dogged hosts, who briefly pulled level in the second half through Giampaolo Pazzini's penalty.

While the win confirmed Inter's best-ever points haul at this stage of a Serie A season, Spalletti insists there is plenty of work ahead to challenge for the Scudetto.

"To be a record-breaking side doesn't have a particular impact. We wrote a line in the history of Inter but now we're looking forward," Spalletti told Mediaset Premium.

"This tunnel will continue until June, and then we will see the light.

"The team played a great match [against Verona] in every respect, but every now and then we play slowly and we leave spaces when we do not have to. We deservedly won, though.

"If we had not won the match, and Roma had played their [postponed match in September] against Sampdoria and won, we would be out of the Champions League places.

"All teams are in there fighting, I'm thinking of teams like Milan who will come back and Lazio who have the quality to stay up there. Everything can change in one moment."

The result left struggling Verona in a far more difficult position as they remain stuck in the relegation zone on six points.

But Verona boss Fabio Pecchia does not believe his job is under the microscope.

"I’ve been working under these conditions for 15 months," Pecchia said.

"I was also questioned last season just before the promotion to Serie A. We'll keep working and as long as the president wants to keep working with me, I will continue to do my job."