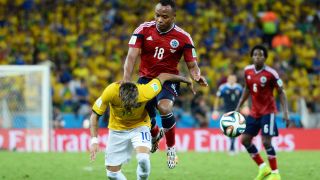 Former Colombia international Juan Camilo Zuniga has announced his retirement at the age of 32.

Having started his career with Atletico Nacional in his homeland, he went on to enjoy spells with Bologna, Napoli and Siena in Italy, as well as a loan stint with Watford in England.

Zuniga made headlines at the World Cup in 2014 after he fractured a bone in Neymar's back, ending the Brazil superstar's involvement in the tournament.

After suffering an injury-plagued few years, Zuniga announced on Wednesday: "Today I'm thinking about my future, my family. I'm stepping aside so that tomorrow, when I want to run around in the park with my children, I'll be able to do so."