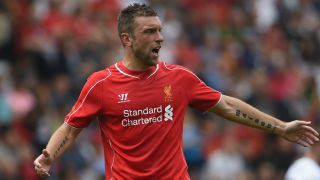 Former Liverpool and England striker Rickie Lambert has retired from football, saying his career has surpassed his "wildest dreams".

The 35-year-old had been without a club since leaving Championship side Cardiff City in July.

Lambert won 11 caps for England and scored three times, playing once at the World Cup in 2014.

At club level, he achieved most success with Southampton between 2009 and 2014, helping the club to two promotions before impressing in the Premier League.

Lambert then joined boyhood heroes Liverpool, but struggled to break into the starting XI for a lone season before rounding off his career with West Brom and Cardiff.

"I feel lucky to have been involved in this sport for as long as I have," Lambert said in a statement.

"I have had some ups and downs in my career but to have represented clubs like Southampton, Liverpool and playing for my country in a World Cup were beyond my wildest dreams.

"Playing and scoring for England is probably my proudest professional moment and I will look back at every aspect of how I got there with fond memories.

"I would like to thank the fans of all of the clubs I played for but especially at Southampton where I enjoyed my best years as a footballer and had a special relationship with everyone connected to the club.

Lambert, who plans to take a break from the game before returning in a new capacity, also represented Blackpool, Macclesfield Town, Stockport County, Rochdale and Bristol Rovers.