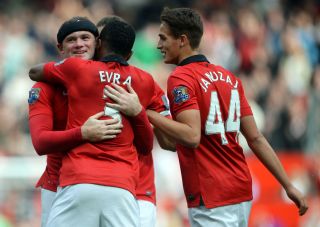 The reigning champions have not been beaten by the west London outfit since December 2009, when goals from Danny Murphy, Bobby Zamora and Damien Duff gave Fulham a 3-0 home victory.

United sit eight points adrift of Premier League leaders Arsenal following an indifferent start to life under new manager David Moyes, but they go into this clash unbeaten in their last six matches in all competitions.

That run includes last Saturday's top-flight success over Stoke City, when they twice came from behind to win 3-2.

And Moyes takes his side to Craven Cottage with a near fully fit squad to choose from, with Danny Welbeck (knee) his only absentee, and the England international's fellow strikers Robin van Persie, Wayne Rooney and Javier Hernandez - who all scored against Fulham last season - all available.

Martin Jol's team, meanwhile, head into the contest on the back of a 2-0 defeat to Southampton in their last Premier League game.

The Dutchman said he was left "puzzled" by their performance at St Mary's, in a game that came just five days after they had crushed Crystal Palace 4-1.

Fulham's attack has been blunt for much of the season, with the win over Palace marking the first time they have scored more than one goal in a Premier League game this term.

But the hosts can have hope of producing an improved attacking display against a United defence that has kept just two clean sheets in nine top-flight outings.

Defender Brede Hangeland could return for Fulham after missing the last two games with a nerve problem in his leg, but forward Hugo Rodallega (groin) is a doubt.

Matthew Briggs, meanwhile, is out with a groin problem.