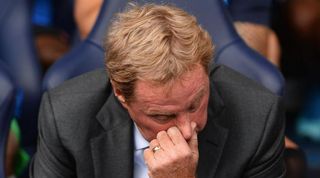 Newly promoted QPR have endured a disappointing return to the top flight thus far, having opened with a home defeat to Hull City before suffering a 4-0 loss at Tottenham.

Redknapp's unhappy return to his previous club last Sunday will be of particular concern, as QPR looked out of their depth against a Tottenham side who were in control throughout and could have won by an even bigger margin.

A trip to fourth-tier Burton Albion in the League Cup on Wednesday should have provided the men from west London with a chance to boost their confidence ahead of Sunderland's visit this weekend.

However, it proved to be another humiliating outing for Redknapp, who watched a perfectly capable starting XI fall to a shock 1-0 defeat.

But Redknapp - publicly backed by chairman Tony Fernandes following the defeat to Tottenham - now wants to draw a line under the events of the past two weeks, and get QPR's first points on the board on Saturday.

"It's important we forget about [Wednesday] as quickly as possible and focus on Saturday's game with Sunderland which is massive now," he said.

"We need to get up and running in the league as soon as possible."

QPR won this fixture 3-1 during the 2012-13 campaign, which ultimately ended in the club's relegation to the Championship, with Loic Remy, Andros Townsend and Jermaine Jenas finding the net after Steven Fletcher had given Sunderland the lead.

It took QPR 17 matches to register their first win during that season, and fears of a similar run this time around will surely start to mount the longer they go without picking up three points.

Sunderland have made a steady start to the new season, holding West Brom to a draw at The Hawthorns before picking up a point at home against beleaguered Manchester United.

Gus Poyet's men romped to a 3-0 win at Birmingham City in the League Cup on Wednesday, and the Uruguayan will now be keen to see his players replicate that performance in the Premier League.

Sunderland are not expected to have any injury concerns for Saturday's fixture, but QPR have doubts over the fitness of striker Charlie Austin (hamstring).

Alejandro Faurlin could also miss out having left the field with an injury during the defeat to Burton, but loan signing Eduardo Vargas - a reported target for Sunderland earlier in the transfer window - could make his QPR debut if his work permit is processed in time.