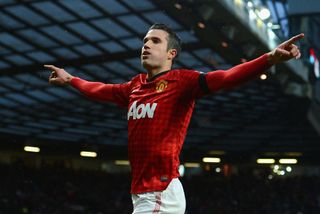 The availability of Netherlands star Van Persie, given an extended break after the World Cup, will boost manager Louis van Gaal, who will hope to prove last week's 2-1 home defeat to Swansea City was an aberration.

A promising pre-season tour and the arrivals of Van Gaal, midfielder Ander Herrera and defender Luke Shaw lifted the gloom around Old Trafford after a disastrous seventh-placed finish last term.

But last Saturday's result proved that change is a gradual process, and that the ex-Netherlands coach has much work to do on his side if they are to claim a top-four finish.

But while Herrera, Marouane Fellaini (both ankle) and Jesse Lingard (leg) have been added to United's lengthy injury list, the inclusion of Van Persie - scorer of 38 goals in 59 Premier League appearances for the club - is a lift.

"Robin is ready to play, so that is a big benefit for our team," Van Gaal said on Friday.

"I'm very happy that he is now able to play.

"Last week, we had nine injuries and now we have seven. It's much too much. I have had this as a manager for the first time. We have to live with this.

"We have four injured midfielders - [Michael] Carrick, from the beginning, but now also Herrera, Fellaini and Lingard, we are thin on midfielders now.

Van Gaal also pleaded with the club's supporters to give him time to reverse their fortunes, adding: "Two weeks ago I was the king of Manchester. Now I am the devil of Manchester.

"I was not hired to be fired, but to build up a team and that is a process that needs time."

Danny Welbeck, Antonio Valencia and Jonny Evans could also make returns  - although Van Gaal's latest signing, Marcos Rojo, is ineligible - for a United side that has already lost to Sunderland twice in 2014.

First came a League Cup semi-final, which Sunderland won on penalties, before Ryan Giggs' second game as United's interim manager - as replacement for David Moyes - finished in a 1-0 home defeat.

That result was one of many surprise wins gained by Sunderland in the latter stages of last term as they avoided relegation against the odds.

Sunderland started this season with a 2-2 draw at West Brom last week, with Sebastian Larsson - scorer of the only goal at Old Trafford in May - netting an 85th-minute equaliser for Gus Poyet's side.

Despite a good recent record against United, it is 17 years since Sunderland, who will miss Emanuele Giaccherini (groin), beat them at home in a Premier League match.