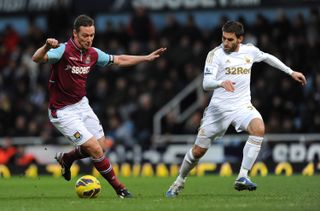 Sam Allardyce saw his side pick up a stunning 3-0 win at Tottenham in their last away game, but that triumph was their first as a visiting side since a 1-0 success at Stoke City on March 2.

However, it has not been all doom and gloom for the London club on their travels this term. In four away games they have conceded just one goal - a Robbie Brady penalty in last month's 1-0 defeat at Hull City.

The Welsh side have only completed consecutive home wins in the Premier League in a season twice since their promotion to the top flight in 2011 and were denied a win at the Liberty Stadium on Thursday when a 90th-minute Djibril Cisse penalty resulted in a 1-1 UEFA Europa League draw with Kuban Krasnodar.

The match has been billed as a clash of styles, with Swansea favouring a possession-based game and West Ham known for a more direct approach.

But Michael Laudrup sees no issue with Allardyce's methods and is anticipating a tough test on Sunday.

He said: "There are some who say one thing and do another, but Sam Allardyce is very honest in what he wants and what he asks from his players.

"They are very strong and when we played them away last year they were very good so we know it will be difficult.

"They were very strong, physical and direct. They had Andy Carroll and Kevin Nolan up front. We know Carroll is not there for this game but we saw how strong they are the last time they played away against Tottenham, where they won 3-0. It will be tough."

Carroll remains on the sidelines with a foot injury that has rendered him unavailable so far this season. Allardyce will also have to make do without Alou Diarra and George McCartney (both knee) and James Collins (hamstring), but will be boosted after the game by the return of Jack Collison from a short-term loan at Bournemouth.

Carlton Cole is set for a place on the bench having re-signed for the club on a short-term basis just five months after being released by them.

Laudrup is without defensive pair Ben Davies and Ashley Williams, both suffering with ankle injuries and is likely to shuffle his pack, having made six changes for the visit of Kuban in midweek.