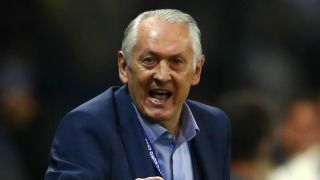 A frustrated Mikhail Fomenko is already looking ahead to Ukraine's clash with Northern Ireland following a 2-0 defeat to Germany in their Euro 2016 opener in Lille.

Manuel Neuer was forced into some smart saves in the first half at Stade Pierre-Mauroy, but goals from Shkodran Mustafi and substitute Bastian Schweinsteiger sealed the victory.

Fomenko cut a disappointed figure afterwards and says victory over Northern Ireland next Thursday is now vital to his side's chances of progressing to the last 16.

"We understand of course that it's going to be very difficult when you play against Germany," he said. "But you have to forget about it. We have to move on to the next match.

"Physically, mentally, everything will be okay, especially in terms of our psychological state. The most important thing is a possible victory in the next game.

"We had to stop them from scoring, and we didn't do that.

"This team is a machine, they have great players who play at a high level. The players knew they would be facing a team at a very high level."