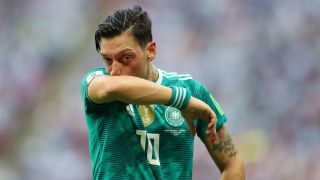 Mesut Ozil has accused the German media of attempting to turn the country against him since his meeting with controversial Turkey president Recep Tayyip Erdogan.

Arsenal star Ozil took to social media on Sunday to post the second installment of a three-part open letter, which began with him defending his reasons for being photographed with Erdogan before the World Cup.

That meeting, at which the midfielder was by joined international team-mate Ilkay Gundogan, prompted an outcry in Germany and led German Football Association (DFB) president Reinhard Grindel to ask for an explanation.

National team manager Oliver Bierhoff also suggested Ozil should have been omitted from the squad that ultimately failed to get out of the group stage at the World Cup, prompting a furious response from the midfielder, who feels he has been made a scapegoat for Germany's poor performance in Russia.

"If a newspaper or pundit finds fault in a game I play in, then I can accept this – I'm not a perfect footballer and this often motivates me to work and train harder," Ozil wrote.

"But what I can't accept are German media outlets repeatedly blaming my dual-heritage and a simple picture for a bad World Cup on behalf of an entire squad."

Targeting unnamed newspapers for using his ancestry "as right-wing propaganda to further their political cause", Ozil also claimed his treatment was unfair given there was little controversy about former Germany star Lothar Matthaus's recent meeting with Russia president Vladimir Putin.

"This crosses a personal line that should never be crossed, as newspapers try to turn the nation of Germany against me," he continued.

"What I also find disappointing are the double standards that the media has. Lothar Matthaus met with another world leader a few days back, and received almost no criticism.

"Despite his role with the DFB, they have not asked him to publicly explain his actions and he continues to represent the players of Germany without any reprimand.

"If the media felt that I should have been left out of the World Cup squad, then surely he should be stripped of his honorary captaincy? Does my Turkish heritage make me a more worthy target?"

Ozil expanded on his criticism of the DFB by questioning why they stood by a controversial sponsor and not him.

"I was renounced by another partner," Ozil said. "As they are also a sponsor of the DFB, I was asked to take part in promotional videos for the World Cup.

"Yet after my picture with president Erdogan, they took me out of the campaigns and cancelled all promotional activities that were scheduled. For them, it was no longer good to be seen with me and called the situation 'crisis management'.

"This is all ironic because a German Ministry declared their products have illegal and unauthorised software devices in them, which puts customers at risk. Hundreds of thousands of their products are getting recalled.

"Whilst I was being criticised and asked to justify my actions by the DFB, there was no such official and public explanation demanded of the DFB sponsor. Why? Am I right in thinking this is worse than a picture with the president of my family's country? What does the DFB have to say about all this?"

There is speculation Ozil will announce his retirement from international football when he releases the final of his three statements later on Sunday.