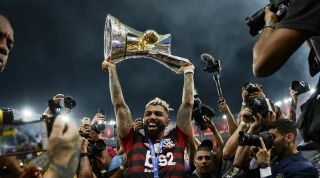 Flamengo striker Gabriel Barbosa admits he would love the chance to play alongside compatriot Roberto Firmino at Liverpool.

The 23-year-old is set to return to parent club Inter at the end of the year, but his future beyond that is uncertain.

And Barbosa, who is nicknamed Gabigol, says he would relish the opportunity to play for Jurgen Klopp's side, who could face Flamengo in the final of this month's Club World Cup in Qatar.

"Firmino is great, I really admire him,” he told The Sun. “He’s been successful for many years in Europe.

“He is a powerful forward and he has been great for Brazil. He is an inspiration that I look up to.

“It would be a pleasure to play with him. Maybe we could team up for Brazil in the future and Liverpool is a team that everyone wants to play for.”

However, Barbosa insists he is not currently focused on his future, with the Club World Cup his immediate priority.

“It is hard to talk about this at the moment,” he added. “My focus is totally on the Club World Cup.

“I like the Premier League very much. It combines technique, strength and speed. I always follow the games from Brazil.

“It really is a place I would like to play. It’s one of the best leagues in the world. Every player dreams of being a champion and winning the Premier League must be indescribable. But I still have a contract with Inter and Flamengo until the end of 2019.”

Following Wednesday's 5-2 thrashing of Merseyside rivals Everton, Liverpool will move 11 points clear at the top of the Premier League if they beat Bournemouth on Sunday.

What exactly does a club’s 'DNA' mean – and do managers really need it?