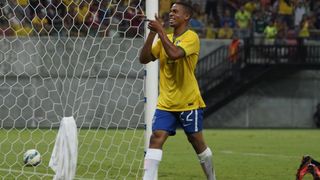 Palmeiras teenager Gabriel Jesus admits it would be a tempting prospect to emulate compatriot Ronaldo in moving to Inter.

The 19-year-old has been linked with a number of major European sides, including Bayern Munich, Barcelona and Real Madrid, after excelling in Brazil in the past year.

Reports in Italy this week claimed that Inter had stolen a march in the race for the attacker's signature following a meeting between the player and Milanese agent Giovanni Branchini.

And Gabriel says the idea of following in the footsteps of former striker Ronaldo, who spent five years at Inter, is appealing.

"The idea of playing for Inter fascinates me," he said, as quoted by Corriere dello Sport. "Great players from my country, like Ronaldo, have worn the Nerazzurri shirt.

"I don't know what's in my future and I'm focused on Palmeiras right now. I want to win the championship with them.

"But the prospect of measuring myself in a major league like Serie A is fascinating."

Former Brazil midfielder Ze Roberto had earlier urged his Palmeiras team-mate to consider spurning all other offers in favour of European champions Madrid.

"I think he is ready to make the move to Europe," the 42-year-old, who won league titles with Bayern and Madrid, told AS.

"A few months ago someone from Bayern Munich got in touch with me to talk about him. They wanted to know how he is outside the pitch. But I think Real Madrid would be the best option for him.

"To work with Zinedine Zidane and train alongside stars such as [Cristiano] Ronaldo, [Gareth] Bale and [Karim] Benzema. He would be able to learn from three of the best. That is why I think Madrid would be ideal for him."