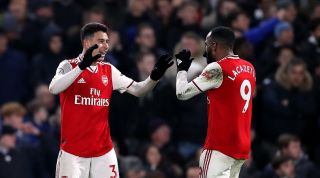 Mikel Arteta has praised Gabriel Martinelli after the youngster's equalising goal against Chelsea on Tuesday.

Martinelli drew 10-man Arsenal level at 1-1 after an incredible run that began deep in his own half.

The Gunners ultimately secured a 2-2 draw thanks to Hector Bellerin's effort in the 87th minute.

Martinelli impressed throughout the match at Stamford Bridge, and has now scored 10 goals in all competitions this season.

And Arteta believes the teenager showed great "courage" to perform as he did against Arsenal's London rivals.

"To play in this stadium the way he has done with 10 men and against Azpilicueta, who in my opinion is one of the best defenders in the league, and he was going against him every single time, you need courage to do that," Arteta told reporters.

"Then his energy. I wanted to take him off a few times because he looked knackered, he was cramping and next minute he's sprinting 60 yards again.

"Not just him. I think Laca [Alexandre Lacazette] is playing at a really good level, even though he's not scoring, and Nico [Nicolas Pepe] as well, and everybody that's coming in. They are fighting really hard in training to try to convince us to play more.

Xhaka was linked with a move to Hertha Berlin earlier in the January window, but Arteta is delighted that he can still call upon the Switzerland international.

"I tried to convince him that this was the right place for him to stay, that I wanted to give him the opportunity to try to enjoy playing football again and everything I ask him to do, every training session he is willing to do it," the Gunners boss said.

Arsenal face Bournemouth in the fourth round of the FA Cup on Monday.