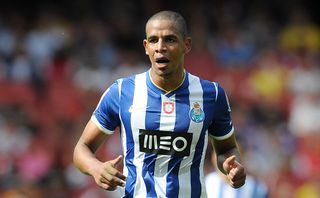 Fernando has been linked with a move away from Estadio do Dragao, with Liverpool and Napoli reported to be interested in the 26-year-old's services.

Reports in Italy had indicated that Milan have been in contact with the Brazilian in an attempt to bolster their midfield further following the capture of Keisuke Honda from CSKA Moscow.

Although Adriano Galliani refused to rule out a move for Fernando, the vice-president insisted that any future business would be dependent on player sales.

"The transfer market? It finishes here, but there could always be a few surprises," Galliani said. "At the time of speaking no more arrivals are expected.

"He (Fernando) is one of many players that we are keeping tabs on, but there has been no offer made.

"We're following him like we are many other players. He's a good player but we'll see.

"At the moment we cannot speak about arrivals because we are a squad of 30, (Adil) Rami and Honda have arrived, (M'Baye) Niang has left and we need to sell a couple of players before talking about new arrivals."

Milan are 11th in Serie A after their 3-0 win over Atalanta on Monday, and can move into the top half of the table with a win at Sassuolo on Sunday.