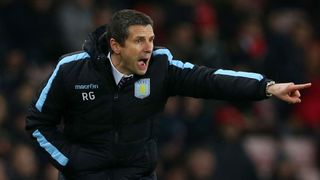 Aston Villa manager Remi Garde believes that the 2-0 victory over Wycombe Wanderers in the FA Cup Third-Round replay at Villa Park was important for his side’s momentum as they look to avoid relegation from the Premier League.

After the League Two side forced a replay following a 1-1 draw at Adams Park 10 days ago, Villa struggled to break down their stubborn opponents before goals from Ciaran Clark and Idrissa Gueye in the final 15 minutes set up a fourth-round tie with Manchester City and stretched their unbeaten run to four matches.

"It is most important to win and go through in this competition," he said. "It was not always easy – we have to congratulate Wycombe because, in the two games, they gave us some tough moments.

"We had to speed up our game in the second half to win that game. I was not happy about our performance in the first half – I think that we could have been more accurate with passing and everything else – but the players gave me the right answer in the last 45 minutes.

"Furthermore, it’s the fourth game in a row without losing, which is very important for our momentum and preparation for the next game.

"We should take some confidence out of this."

Next up for the Premier League’s bottom side is a crunch West Midlands derby against West Bromwich Albion at the Hawthorns on Saturday.

Garde added: "It’s going to be a tough game and very interesting for us."