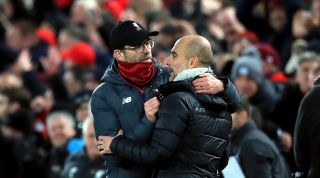 Gary Lineker has praised both Jurgen Klopp and Pep Guardiola but says he finds the Liverpool manager "more engaging".

Klopp's side moved 19 points clear at the top of the Premier League table after beating West Ham on Wednesday.

Guardiola has already conceded defeat in the title race, despite having won the league with Manchester City in each of the last two seasons.

And Lineker believes both managers have raised the bar in England's top flight in recent years.

"We’re seeing football that’s unprecedented for a variety of reasons but, obviously, there’s the influence of Pep and of Klopp," he told the Guardian.

"They’re contrasting, but they’re both exhilarating. They are certainly in the top five coaches, perhaps even the top two, in world football.

"Their different styles add to the rivalry. I love them both but Klopp's probably more engaging. You can see Pep’s pretty intense in his post-match interviews. He’s hard work whereas Klopp can always put it on. I guess we’ve seen Pep’s dark side.“

"But what Guardiola’s done is special. He was a very young coach at Barcelona but he still transformed their players. Obviously they played a system based on Cruyff – which both Pep and I played under at Barca.

"That’s to make the pitch as big as you can when you’ve got the ball, and then shrink it when you haven’t. Klopp introduced his own style – this dynamic high-octane pressing game. It’s generated fitness and mental belief within his players. What Klopp did at  Dortmund was remarkable and what he’s built at Liverpool is even better. He’s obviously been involved in recruitment and that’s crucial.

“When they bought [Mohamed] Salah everybody thought: ‘Hmmm … should be all right.’ [Sadio] Mané looked a good player at Southampton. But did we think he was this good?

"[Jordan] Henderson was there and everyone goes: ‘Nah. He’s nothing special.’ Everybody had a go at him. Now people are realising this kid’s a bloody good football player and a real leader.

"We all knew [Virgil] Van Djik was good but he came from Celtic and Southampton. [Georginio] Wijnaldum came from Newcastle. [Andy] Robertson didn’t cost much from Hull. Trent [Alexander-Arnold] came through the academy and he’s going to be the best of the lot.

“They’ve got lots of special players, particularly up front with the big three. But Trent is very special. He’s one of those players I watch every game and see three or four things from him that I go: ‘Oh my God.’

"Like the Champions League semi-final against Barcelona with that quick corner. What a remarkable thing for a kid to do – to have that gall and bravery against some of the world’s best players.

"That could’ve ended up looking stupid but he’s smart. I interviewed him a year ago at his home. He was very shy and you can be kidded by a soft scouse accent but this kid’s really intelligent.”