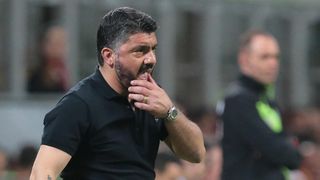 Gennaro Gattuso will not allow the upcoming Coppa Italia final to act as a distraction for AC Milan, with the Rossoneri still chasing European qualification.

Milan face Juventus at the Stadio Olimpico on Wednesday, but first take on relegation-threatened Verona on Saturday as they look to move towards a finish inside Serie A's top six.

A run of one win in seven league games has ended Milan's hopes of qualifying for the Champions League, but Gattuso will not prioritise one of their remaining routes into the Europa League over another.

"We can't make the same mistake we made against Benevento in our last match at home," Gattuso said, referring to a 1-0 loss two weeks ago. "We are fighting to qualify for the Europa League. It's the most important stage of the season.

"Our full focus is on Verona. We can't get distracted by already thinking about Juventus. I want my boys to play well [on Saturday]. I want to show that we are in good form.

"I'm fully focused on finishing the season in the best possible way. I hear people already talking about the transfer market, a new striker; from all of us here, our only goal is to finish the season strong, doing the best we can. Then we will see.

"We are only focused on Verona. Yes, it's true, if we win the Coppa many scenarios change regarding the standings, but our head is now only on Saturday's match.

"We have been preparing very carefully for Verona. I have seen a great intensity in training these days. Having worked in the afternoon may have benefited the boys."

Gattuso rejected speculation Giacomo Bonaventura is looking to leave Milan at the end of the season, the versatile midfielder having been linked with a switch to Juventus.

"He has never said he wanted to leave and the club is not interested in selling him," Gattuso said. "In fact, I think they are talking about his contract renewal. I've always let him play because I know what he can give the team. There's big confidence in him.

"I've always said we need three or four new players to improve this team. We are young, to raise the bar we need spirit and mentality, players who are used to certain types of matches. It may be true that we are looking for experienced players, leaders.

"I never said that we are missing players. I've never pointed at someone for lack of commitment, but it's the performance that makes the difference. We have to play the games as we prepare them during the week, not everyone in their own way."