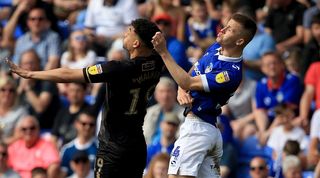 The 21-year-old rejected the offer of a new contract at the League Two club amid sustained interest from Steven Gerrard’s side.

The Herald reports that the Scottish Premiership side saw a £450,000 bid rejected last week and returned with a £500,000 offer, but Oldham have held firm in their resistance.

Edmundson subsequently looked to move things along by requesting a transfer, but his club are said to want closer to £1 million for the young centre-back.

Rangers could face competition from the likes of Derby, Portsmouth, Stoke and Wigan, with three bids from English clubs having already been turned down.

The young defender, who is entering the final year of his contract, was named as his club’s player of the year for 2018/19 and also earned a place in the League Two team of the season.