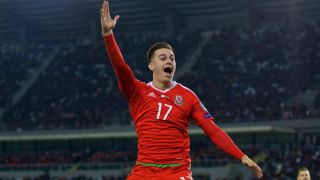 Tom Lawrence's superb first international goal gave Wales a crucial 1-0 away win over Georgia as their bid to qualify for the World Cup was boosted despite the absence of injured talisman Gareth Bale.

After his side edged a goalless first half that lacked clear goalscoring opportunities, Lawrence struck with an impressive individual effort early in the second.

Wales looked the more likely to add a second goal before eventually settling for a one-goal victory, with Georgia offering little as an attacking force despite holding the possession advantage.

Chris Coleman's men will now be interested observers as Group D leaders Serbia, who are one point ahead, travel to Austria later on Friday.

Meanwhile, Republic of Ireland – now four points behind Wales in the race to finish second - host Moldova in their game in hand.

Wales, who will be without Real Madrid star Bale again, then face a huge clash at home to Ireland on Monday as they look to wrap up second spot, while also ensuring they have enough points compared to runners-up in other groups for that position to secure a play-off spot.

That feeling when you bag your first goal!Tom Lawrence puts Wales ahead in Georgia October 6, 2017

Sam Vokes diverted just wide when Ramsey's right-wing cross created a good opportunity, while Lawrence fired over from 20 yards, as Wales struggled to turn their attacks into attempts on target.

Georgia's first chance of note saw Otar Kakabadze whip in an impressive cross from which Giorgi Kvilitaia sent a free header wide from eight yards in a huge let-off for Wales, leaving the scores level at half-time.

After a frustrating first half, a moment of brilliance from Lawrence put the visitors in front just four minutes after the restart.

Receiving a pass from Ramsey, Lawrence impressively beat Saba Kverkvelia and fired a right-footed shot into the far corner from 20 yards, with Loria unable to save despite getting a touch.

Lawrence curled wide as Wales pushed for a second, while only a brave home block denied Ben Davies from finishing off a slick passing move.

Georgia had most of the second-half possession, but it was Wales who were creating more – Lawrence and Ramsey combining again before the Arsenal midfielder forced Loria into an unconvincing save.

The hosts finally threatened an equaliser late on when substitute Davit Skhirtladze found Giorgi Merebashvili, who cut inside and forced Wayne Hennessey into a pivotal stop from close range, which secured a third consecutive qualifying win for Coleman's side.