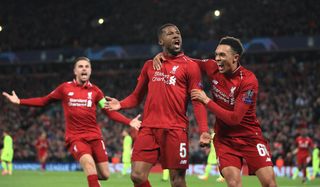 Georginio Wijnaldum took out his frustration on Barcelona after starting on the bench as his second-half brace helped Liverpool to a stunning Champions League semi-final comeback at Anfield.

The midfielder scored twice in the space of three minutes shortly before the hour to make it 3-0 on the night and 3-3 on aggregate before Divock Origi’s second of the night in the 79th minute sent Liverpool into the Champions League final.

“Unbelievable,” Wijnaldum told BT Sport. “After the game in Spain, we were confident we could score four at home.

“Once again we showed that everything is possible in football. I was really angry at the manager that he put me on the bench but I had to do something to help the team when I came on.

“We believe it from the start. People from outside (the club), they thought it was not possible but we still managed to do this.”

The fourth goal was the standout moment as quick-thinking from Trent Alexander-Arnold from a corner set up Origi for an easy finish.

With Barca still setting up their defence and walking back slowly, the 20-year-old right-back spotted Origi completely unmarked and played a quick low cross for the Belgian to finish.

“I think it was just instinctive,” Alexander-Arnold said. “It was one of those moments where you see the opportunity.”

Origi paid tribute to his team-mates and also the fans who created the atmosphere on which Liverpool thrived.

“I think it was more about the team,” he said. “We fought so hard. We fought until the end. It shows we have a good mix of talent and hard work.”

Asked to comment on the passion shown by the fans, he added: “It’s just special, you can feel it, you can hear it.”

Liverpool had started the match without Mohamed Salah and Roberto Firmino, and then lost Andy Robertson to an injury which brought Wijnaldum into the game at half-time.

The Dutchman had already got himself ready to come on once when Jordan Henderson went down under a heavy challenge, but the club captain was able to see the game out.

“I don’t think many people gave us a chance,” Henderson said. “We knew that it would be difficult but it was still possible for us.

“The belief we’ve got in the changing room. At Anfield, we knew we could put on something special.

“We wanted to start fast, we got an early goal which helped. We knew that if we gave everything, showed a bit of personality, a bit of heart (we could win).”