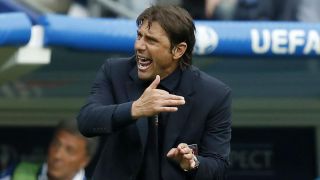 Italy coach Antonio Conte has hailed Germany as "the most complete side in the world" ahead of their quarter-final clash at Euro 2016 on Saturday.

Conte's men were trounced 4-1 by Germany in a friendly in March and the soon-to-be Chelsea manager is a huge admirer of the world champions.

He said: "We are playing a very strong team. I think they're better than Spain at this moment in time. They have everything that a strong side needs, technical ability, talent, physical power, organisation, tactical set-up ... they are the most complete side in the world.

"They are in a very good period with a lot of strong players."

Conte insisted his team has improved since that friendly defeat just over three months ago and says he is enjoying defying the critics who wrote Italy off prior to the tournament.

"If we were to go back a month, this game would not have been a contest for a number of people looking at the sides, but now we are here on the eve of a quarter-final.

"We started our journey at the European Championship with little credibility, not just from the Italian media but also the international media. Everyone thought it was dark days for the Italian game but we are showing that, through hard work and organisation, and 23 players who are working hard, that we could do something extraordinary against Spain.

"On Saturday we will have to do something absolutely extraordinary.

"We have made significant progress since the friendly, we learned a great deal. It was a resounding defeat for us but that will give us greater stimulation to see if the gap has got bigger or smaller."

Despite talking up Germany at every opportunity, Conte made it clear his players would not be intimidated at facing such quality opposition.

"I don't know if I'd have preferred being at home as opposed to being stressed," he joked.

"I don't need to keep an eye on stressing them out, there are more serious problems than emotional stress.

"We view Germany as by far and away the best side in the world but I don't want to stress my players out from this perspective.

"We've studied the opposition as it will be a different match to the Spain game. We're well aware of our strengths and weaknesses, as we are those of the opposition."

Conte refused to state whether midfielder Daniele De Rossi had recovered from injury but acknowledged any starter had to be "120 per cent fit for games like this" and also dismissed suggestions the fact Italy have 11 players on a yellow card suspension would be a hindrance.

"It shouldn't be a concern for my players because there is no tomorrow for the losers so bookings and suspensions are the last things on our mind," he said.