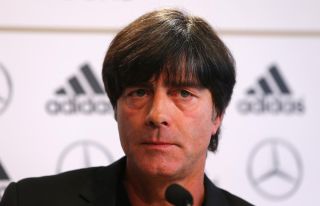 Germany have not lifted the trophy since 1990 but, after losing the 2002 final and finishing third at the last two tournaments, coach Low believes they are prepared to end their 24-year wait for more success in South America.

Low's side face a tricky task in Group G having been drawn alongside Portugal, Ghana and the United States, but with 100 days to go until the finals begin, the 54-year-old is focused entirely on glory at the Maracana on July 13.

"Of course we are ready for the World Cup," Low said.

"Since the draw we are constantly thinking about the World Cup in Brazil, our entire focus lies on the players and on our team and on the process and the organisation.

"I think you have to differentiate a little. Of course it applies to the situation overall, but also the expectation of the fans, everybody's ready to fight for the title we feel a great support in the country and an incredibly huge interest.

"We the managers have always been ready; we're under tension ahead of every tournament and always go into each with full concentration. But it applies more because Germany hasn't won the title in a long time and of course we will try everything to reach that title."

Germany continue their preparations for the World Cup with a friendly against Chile in Stuttgart on Wednesday.