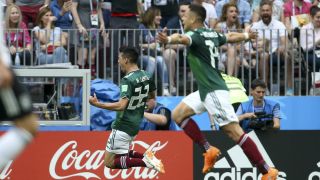 To misquote Benjamin Franklin, in this world nothing can be said to be certain except death, taxes and Germany winning their opening game at a World Cup.

Die Mannschaft came into this clash with Mexico having won their opening game at each of the last seven tournaments. If that was not impressive enough, their last four World Cup openers have yielded 20 goals in the for column - eight against Saudi Arabia in 2002 and four against each of Costa Rica, Australia and Portugal.

Mexico, on the other hand, were supposed to be in the middle of a goalscoring crisis.

And yet, this result did not have the feel of a huge surprise. There has been a lingering sense for some time that all is not right in the Germany camp.

Coach Joachim Low alluded to it in his pre-match media conference when he talked about the problems caused when teams evolve over the four-year cycle in between World Cups.

In the 2014 final defeat of Argentina, Germany were able to include the vastly experienced, and hugely influential, trio of Philipp Lahm, Miroslav Klose and Bastian Schweinsteiger in their starting XI.

Lahm and Klose have long since retired while Schweinsteiger continues to wind down his career in Major League Soccer.

Replacing them as players is difficult enough, replacing all three from a leadership perspective nigh on impossible. Germany still possess plenty of experience - six of the XI that started the final at the Maracana four years ago started here: Manuel Neuer; Jerome Boateng, Mats Hummels, Toni Kroos, Mesut Ozil and Thomas Muller.

But results suggest this is a team in decline.

Germany had won just one of their previous six games, and that a scratchy 2-1 defeat of a Saudi Arabia side hammered 5-0 by Russia on Thursday.

And while Low will not publicly admit it, reports suggest he and his backroom staff remain furious at Ozil and Ilkay Gundogan - two players of Turkish descent - for meeting with controversial Turkish president Tayyip Erdogan last month.

Both players were booed by Germany supporters during the warm-up matches - Gundogan's car was also vandalised - and Ozil's was the only name not to receive a loud cheer when the sides were read out prior to the clash at Moscow's Luzhniki Stadium.

Ozil has been a mainstay of Low's Germany - starting every game at a major tournament during his tenure - and, while widespread reports he would be dropped on Sunday proved incorrect, the Germany boss may now be wondering if he is a luxury he can afford.

What Low would give for a player in the mould of Hector Herrera.

The Porto midfielder was a bundle of energy - Speedy Gonzales with a first touch - particularly in a first half where he and Andres Guardado made the likes of Kroos and Ozil look ponderous.

Mario Gomez was thrown on in a last-ditch attempt to salvage a point but headed over from point-blank range.

Fans of Gomez like to 'press the button' when he scores but had no cause to on Sunday.

However, fans of Germany should not necessarily press the panic button either. The last time they lost their opening game at a World Cup was to Algeria in 1982.

They reached the final that year as West Germany. Despite this setback - and all the associated problems - do not rule out a repeat. This is Germany after all.