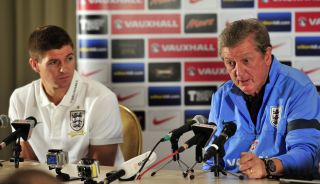 Roy Hodgson's men take on Poland at Wembley in Group H on Tuesday knowing a victory will guarantee them a place at the 2014 FIFA World Cup.

England look destined for the play-offs if they fail to win, with the second-placed Ukraine set to move above them with victory against minnows San Marino.

But the possibility of taking part in the play-offs has not crossed the mind of England players according to Gerrard, who is confident they will progress to next year's showpiece in Brazil with victory.

Gerrard said on Monday: "None of the players have mentioned the play-offs.

"We want to seize that opportunity. We want to win tomorrow, 90,000 at Wembley, a full house, we are ready to go.

"I think the Poland tactics will be very similar to Montenegro (who England beat 4-1 on Friday). They will want to defend well.

"But with the attacking players we have I think it will be a matter of time before we get the breakthrough. We have that confidence.

"When Roy gave me the captaincy on a permanent basis, the job for me was to try and lead the boys to Brazil.

"It's going to be a fantastic carnival tournament out there and everyone wants to be a part of it. That's why it is so important we go and win."

Hodgson re-iterated the view of his captain and said the team owed a performance to the big crowd expected at Wembley.

"I don't know I will be particularly satisfied if we don't win and make the play-offs," he said.

"We don't discuss that. This is our game, this is our stadium, these are our fans. We want to win."

Up to 18,000 Poland fans are expected are at Wembley, which should ensure their players – who know they cannot qualify for the World Cup - will have no shortage of motivation.

Concerns about the large numbers of Polish support were refuted by Hodgson though, who called on the England fans to drown them out with their own noise.

When asked if the massive away allocation would improve Poland, Hodgson said: "I presume it will. I'm certain they would rather play in front of 18,000 fans rather than hardly any fans at all.

"We have a lot of Polish people living in this country and from what I understand, the FA were forced into this decision because (of the potential) of infiltration in the home ends.

"(But) our players are pretty used to playing in front of big crowds. If our fans get behind us like they have so far, then I don't fear that (away fans)."