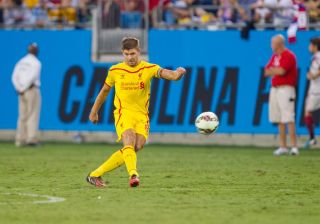 Gerrard's side return to Europe's elite club competition following a five-year absence this season, and Thursday's draw in Monaco paired them with Real.

Basel and Ludogorets complete Group B, but it is the prospect of facing a stellar Real team - who defeated rivals Atletico Madrid in the 2013-14 final - that has captured Gerrard's imagination.

Former England skipper Gerrard has fond memories of Champions League meetings with Real, with the 34-year-old having scored twice in a 4-0 rout of the Spanish giants at Anfield at the last 16 stage of the 2008-09 competition.

And while a repeat of that scoreline appears unlikely, Gerrard - who lifted the Champions League trophy in 2005 - believes Liverpool can compete with Cristiano Ronaldo and co this time around.

"They were one of the sides that all of the players wanted, and certainly the supporters," he told the club's official website.

"For us, it's a chance to go and compete against the best. We're not in this competition to make the numbers up, we're not celebrating and going out to enjoy this competition - we want to compete and go as far as we can.

"We're going to treat every team in the group the same - but, of course, it's going to be an exciting encounter when Real come to Anfield and also us going away as well. I can't wait.

"It's a chance for us to compete against some of the best players in the world - the likes of Gareth Bale, Cristiano Ronaldo, James Rodriguez and Karim Benzema.

"We're quite a new team, so it's a great chance for our lads to compete and see how good we are and how far we've come.

"We've got a lot of respect for Real Madrid but we certainly have confidence we can compete with them."