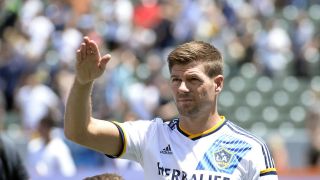 Steven Gerrard expects to retire within the next 12 months and is planning to move into coaching when he calls time on his playing career.

The former Liverpool captain joined LA Galaxy on an 18-month deal last June but admitted towards the end of the year that he found the significant travelling involved in the United States' top flight to be surprisingly difficult.

Gerrard has now stated he expects the 2016 campaign to be the last of a stellar playing career which has seen him win the Champions League, UEFA Cup, FA Cup and League Cup with Liverpool.

"I'm not 100 per cent sure but I think it will probably be my last year as a player," he told The Daily Telegraph.

Gerrard has spent time training with his former club during the past few weeks and he confirmed there is interest from manager Jurgen Klopp in bringing him back to Anfield.

"I have had a chat with Klopp. I haven't had an offer as such, but the club have let me know they are keen for me to come back but there hasn't been a conversation where they have said: 'We want you to do this, we want you to do that'," he said.

"They have welcomed me back in. I am always going to be biased towards Liverpool and the [English] FA and basically when I am back home I am going to carry on with my punditry work and try and move around clubs and gain more experience, going to watch managers and learning more.

"I am basically available from November, December 2016. Everyone in the football world will know I am available and hopefully I will be 75 per cent into my coaching badges."

Gerrard is now fully focused on entering coaching and admits a regret at not focusing on earning his badges sooner, while urging Premier League clubs and the FA to do more to keep top players involved in the game after retirement.

"They should be getting offers they cannot refuse. If a player has got 100 caps and 700 club games how can a club and the FA just let them go? They have so much to offer," the 35-year-old added.

"A lot of clubs don't let it happen - they don't let players like that go. You see it at Manchester United with Ryan Giggs, Barcelona with Pep Guardiola, they say when you finish here, this will happen.

"I have regrets I didn't start my coaching badges at 21-22. All that time wasted in hotels as an England player when I've been bored and was watching 'The Office' and 'The Sopranos'. I wish I'd done my CBA [coaching] licence then so I'd be doing my pro-licence now.

"I admire that Gary Neville has made the jump so soon, especially into a big club like Valencia.

"Gary was one I thought would go into a role around a first team set-up when he finished playing. You have to tip your hat to him - he is being brave. It will be a great experience for him."