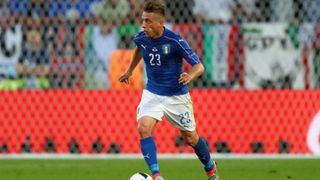 Emanuele Giaccherini's agent has confirmed a deal to take the Italy international to Napoli is "all done".

Giaccherini has endured a largely ineffective three-year spell at Sunderland, struggling to adapt to the physicality of the Premier League, after joining from Juventus in 2013.

Having spent last season on loan at Bologna, the 31-year-old impressed hugely at Euro 2016 with a series of influential displays for the Azzurri.

That sparked interest from Torino, but it appears Napoli have pipped them to Giaccherini's signature.

His agent Furio Valcareggi told Radio CRC: "We're almost there, it's all done for Giaccherini, the last few details are being ironed out with Sunderland.

"The boy is very happy. It was a choice made by him and his wife.

"He's finally getting what he deserves after being underestimated for years."

On Torino's interest, Valcareggi added: "We had an agreement but then came an offer from Napoli.

"[Torino chairman Urbano] Cairo may not agree with our choice but he will understand why. The career of a footballer is short and everyone has the right to choose.

"It was inevitable that an offer by Napoli would be answered affirmatively."