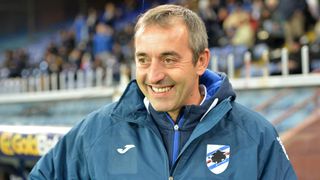 Marco Giampaolo has extended his contract as head coach of Sampdoria, the club have announced.

"U.C Sampdoria announces the renewal and extension of Marco Giampaolo's contract," the Serie A side confirmed in a statement.

"To everyone's satisfaction, the first-team coach is tied to the club until June 30, 2020."

Giampaolo, who had been linked with the Fiorentina job, told Samp's official website: "I'm very happy, because this was the president's initiative.

"It's an appreciation of my work but also of that of the boys and all those who work with us.

"Did Fiorentina want me? No, there was nothing. When you have a contract your head is only in the place where you work. There's always gossip around the market."

Samp sit ninth in the table, having won 12 and drawn eight of their 30 matches this season.