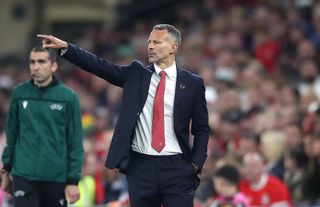 Bale struck six minutes from time – his 32nd goal for his country and his first in 10 months – to give Wales a 2-1 victory and lift them to within three points of Group E pacesetters Croatia and Hungary.

Anything but victory against Azerbaijan – ranked 109 in the world and 85 places below Wales – would have been a disaster for the Dragons’ hopes of qualification.

“Obviously Gareth has scored so many important goals for Wales over the years,” Giggs said.

“Usually when he scores he keeps scoring, so I was glad to see him score for Real Madrid last week.

“Just like the rest of the lads he showed great character, kept going to the end, I am really pleased for him.

“We were too hasty to get to the goal, too rushed. I’ve been in games like that before, you’re never sure whether to stick or twist. There weren’t enough players in good form in the first half.”

The full-back was unaware that Bale’s deflected shot was spinning in his direction and he headed it past advancing goalkeeper Salahat Agayev.

But Azerbaijan equalised through Mahir Emreli after 58 minutes with Neil Taylor and Wayne Hennessey both culpable in a Welsh comedy of defensive errors.

Giggs said: “I wasn’t happy with the first half. We didn’t play well and we didn’t stick to the game plan.

“I knew 1-0 wouldn’t be good enough, I was frustrated. We had a lot of possession but we did not move the ball quick enough.

“We weren’t patient and that is what they are good at, sitting back in their shape, win the ball and sprint forward.”

But Giggs praised his side’s battling qualities, adding: “I am delighted with the three points, with the character we have shown.

“We always work hard and we will learn from it.

“We will enjoy this because it’s not easy to win points in this group.”

Azerbaijan remain without a point at the halfway stage of the group.

“It was a very intense match and an improved performance from us,” Azerbaijan manager Nikola Jurcevic said.

“We played against a strong opponent and we showed good organisation and fought very well and I can say I am very proud of my team.

“But we were unlucky with the goals we conceded in the first half and a few minutes before the end of the game.

“They were favourites for the game, but we were very close to getting a point.”