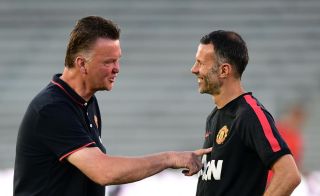 The Dutchman - only officially unveiled to the media on July 17 following the Netherlands' World Cup campaign in Brazil - opened his United tenure with a 7-0 rout of the Los Angeles Galaxy in the club's first game of their Untied States tour on Wednesday.

Assistant manager Giggs told reporters the 62-year-old - winner of 19 trophies at four different clubs including Ajax, Barcelona and Bayern Munich - reminded him of legendary tactician Ferguson, who enjoyed 27 years at the helm in Manchester.

"They do both have an aura about them. That comes from the success they've had. They demand the players respond and they demand respect," said Giggs.

"Louis' CV speaks for itself. He's managed at big clubs and he is coming in to the job off a successful World Cup so, already and recently, he's shown what he can do and I think the players have responded to that.

"He wants to attack, score goals, be aggressive and play attractive football. He's willing to give young players a chance. It ticks the majority of the boxes in terms of what it takes to be a Manchester United manager.

Giggs added: "In the short space of time I've worked with Louis, you can see why he's been a success. He's infectious. He wants everything right from the first minute of training to the last.

"Everything we're working from is the blueprint he sent over from when he was at the World Cup - every minute of every session is laid down.

"Everything he does is clear and everyone gets it straight away. He's got a unique way of putting it over but it's brilliant to see. To see it first-hand is great for my experience and the players. It's just clear.

"It's quite simple, but if you make a mistake he’ll tell you, and if you do something good he'll tell you."