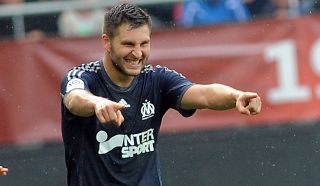 The Marseille striker has scored three times in Ligue 1 this season and features in Deschamps' 25-man squad for the World Cup qualifiers against Georgia and Belarus in September.

Gignac was part of the France squad that refused to train at the World Cup in South Africa after Nicolas Anelka's expulsion.

However, Deschamps confirmed that the 27-year-old's domestic form saw him recalled.

Newcastle United midfielder Yohan Cabaye is one of the notable absentees, having not played in a competitive game for his club this season.

The former Lille man is the subject of interest from Arsenal and had been a regular fixture in Deschamps' selections.

Monaco's Jeremy Toulalan misses out on a recall despite fellow midfielders Paul Pogba and Blaise Matuidi both being suspended for the clash in Georgia.

France sit second in their group, a point behind leaders Spain.

Wins in the next two qualifiers will secure them a place in Brazil.