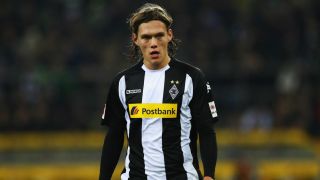 Borussia Monchengladbach have no reason to sell Jannik Vestergaard to Arsenal, according to sporting director Max Eberl.

The 25-year-old has been linked with the Gunners and London rivals Tottenham following his impressive performances this season.

However, Gladbach appear unwilling to negotiate the sale of the Denmark international, who has three years remaining on his contract.

"There is no reason for us to give up Jannik," Eberl told Bild.

Arsenal, who were knocked out of the FA Cup by Nottingham Forest on Sunday, are said to be keen to recruit a long-term replacement for Per Mertesacker.

They have already signed 20-year-old Konstantinos Mavropanos from PAS Giannina this month but are expected to send him out on loan.

West Brom's Jonny Evans has been linked with a move to the Emirates Stadium but manager Arsene Wenger on Sunday denied that they were close to any signings.