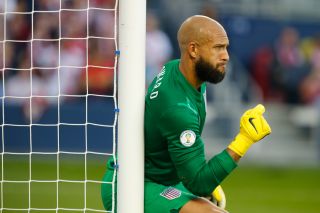 Howard helped his country to a 2-0 win over Jamaica in Friday's FIFA World Cup qualifier.

With his country having secured their progression prior to that clash, Brad Guzan will take over from Howard in goal for Tuesday's trip to Panama.

"He has been outstanding for Aston Villa all year, and he has been huge in the games he has played for us in World Cup qualifying.

"As I said before, we have one of the best situations in the world when it comes to our goalkeepers."

Howard will now travel back to Merseyside ahead of Everton's visit of Hull City on Saturday.

The 34-year-old has been an ever present in the Premier League this season, helping Roberto Martinez's side into seventh place.