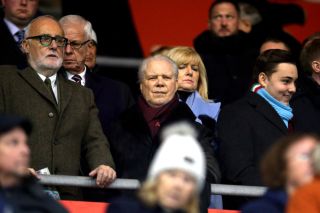 West Ham co-owner David Gold has apologised for “liking” a tweet which appeared to call Caroline Flack “weak” and has promised to make a donation to a mental health charity.

The 83-year-old, alongside long-term business partner David Sullivan, has come under increasing scrutiny from supporters for the way the Premier League club are being run.

The Hammers sit 18th in the table ahead of Wednesday night’s rescheduled clash with reigning champions Manchester City.

I think West Ham are okay, we have a new big stadium, a board that support to the best of their ability (limited) and players who need some kinda support.— Mikespace™ Chat (@MikespaceChat) February 17, 2020

“I think West Ham are okay, we have a new big stadium, a board that support to the best of their ability (limited) and players who need some kinda (sic) support.

“I get abused every other day for my opinions. If I was Caroline (weak) I’d of topped myself!…,” was tweeted by user @MikespaceChat.

Gold later removed his “like” from the message and issued a short response through the club on Tuesday morning.

“I apologise unreservedly for liking a tweet last night that I shouldn’t have,” he said.

“It was never my intention to condone the sentiment expressed in the second half of it. I hastily pressed ‘like’ and very much regret doing so. I will be making a donation to Heads Together to recognise their important work.”

Flack, the star who most recently fronted ITV2’s successful dating show Love Island, was found dead at her London flat on Saturday after taking her own life.

Friends and colleagues of the 40-year-old have since spoken out about the treatment of Flack in the media and on social platforms.