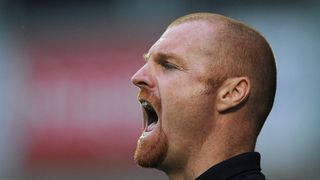 Sean Dyche has wriggled out of claims he used to eat worms during training as a player, joking he eats gravel for breakfast instead.

The gruff-voiced Burnley boss was accused of chowing down on worms by former Bristol City team-mate Soren Andersen, who was speaking on Danish podcast Fodboldministeriet.

"He had exactly the same voice," Andersen said. "Maybe the voice comes from eating earthworms because every time we trained, he used to eat earthworms.

"It was horrible, I've never experienced anything like it. It was like: 'Whoops, there's an earthworm,' and then he ate it. It was a bit disgusting and very strange. He was a good player, and I enjoyed being around him, but the thing with the worms was really strange."

Asked by the media about Andersen's culinary comments on Thursday, Dyche dismissed the dietary digression as a mere prank.

"I also smoke exhaust pipes. I have gravel for breakfast," Dyche joked. "Those three combined often are the things that keep this voice sounding how it is.

"It's fair to say I didn't actually eat the worms. It was a bit of banter I used to have - I've done it here and Watford too - that you get a nice, big juicy worm hanging out of your mouth.

"Look as if you're chewing it and then spit it out, wash your mouth with water. It was a bit of banter that Soren has probably taken a bit too far, he was probably turning away at that moment. He's a good lad.

"For the record I definitely don't eat worms and I never did."

Burnley remain seventh in the Premier League despite a six-game winless run, with Manchester United the visitors to Turf Moor on Saturday.

And Dyche believes United's seemingly impending signing of Arsenal forward Alexis Sanchez will have a knock-on impact on Burnley's ability to complete transfers.

"It creates a tougher challenge because every time one of the super-powers spends enormous money on a player, that drip-feeds down the market," he said.

"So every player you then phone about has miraculously gone considerably up in value because they'll say: 'Well if he's worth that, our players must be somewhere near as good as that.'

"So where does the next move from us come from? Where's the next valuation on one of our players or one of our targets?"