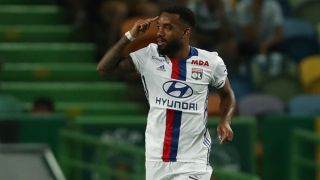 Alexandre Lacazette says France team-mate Antoine Griezmann has long been trying to convince him to leave Lyon for Atletico Madrid.

Lyon president Jean-Michel Aulas stated on Saturday that Diego Simeone's side have come to a verbal agreement with Lacazette over a move in the next transfer window.

The striker had already confirmed his intention to leave Ligue 1 at the end of the season and spoke highly of Atletico, although any deal would depend on a successful appeal to the Court of Arbitration for Sport (CAS) against a FIFA-imposed transfer ban.

Lacazette says the chance to join Atletico would be hard to reject and admits that Griezmann has been attempting to persuade him to move.

"They're one of the clubs that are hard to refuse," he said after Lyon's 3-3 draw with Nice on Saturday, in which he scored twice.

"Besides, Antoine has been trying for a while to get me to come."

Atletico's transfer ban was handed down in January 2016 by FIFA after they and Real Madrid were found guilty of a breach of laws regarding the international transfer of players under the age of 16.

Madrid had their punishment halved following an appeal, meaning they can sign players in the next transfer window. A decision on Atleti's appeal is yet to be announced.