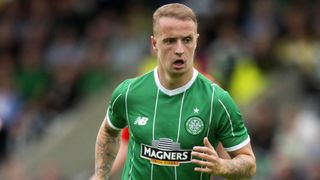 Leigh Griffiths grabbed a hat-trick as Celtic's preparations for their Scottish Premiership title defence continued with a comprehensive 4-1 victory over Spanish side Eibar.

Having already enjoyed friendly victories over FC Den Bosch and Real Sociedad and made a winning start to their UEFA Champions League qualification campaign, Ronny Deila's men travelled to the Basque country in confident mood.

They had to wait until the second half to break the deadlock, however, with Nigerian defender Efe Ambrose nodding home a cross from Griffiths after 49 minutes.

The visitors were then indebted to goalkeeper Logan Bailly for preserving their lead with a fine save from the lively Thaylor Lubanzadio, before they doubled their advantage from the penalty spot.

Griffiths was the man impeded in the box and the former Wolves striker took responsibility himself, calmly sending the ball into the bottom corner of the net.

Eibar - reprieved relegation from La Liga after Elche's tax-related demotion - did manage to grab a lifeline, also from the spot, when Emilio Izaguirre was penalised for handball and Mikel Arruabarrena found the net.

But Griffiths duly restored Celtic's two-goal cushion with a fine strike in the 74th minute and then captialised on a slip from defender Jon Errasti to complete his hat-trick and add some gloss to the scoreline seconds from time.

Next on the agenda for Deila's side is the return leg of their Champions League qualifier against Icelandic outfit Stjarnan on Wednesday, with Celtic 2-0 ahead on aggregate.