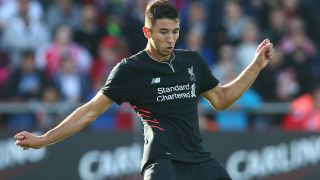 Grujic, 20, signed a five-year deal at Anfield in January from Red Star Belgrade, before being granted his work permit for England earlier this month.

The promising midfielder scored in his first game in Liverpool colours, netting the opening goal in a 5-0 friendly win over Fleetwood Town.

Grujic said when he was debating making the switch to Liverpool he spoke to Chelsea midfielder Matic, as well as Liverpool's Lazar Markovic and Manchester City's Aleksandar Kolarov, who all told him to sign for the Merseyside club.

"Nemanja is a good friend. He started at the same club as me and is one of the key players for the national team," Grujic said.

"He plays in the same position as me and I would like to play as his partner in the middle of the pitch for Serbia. I can learn a lot from him.

"We spoke a lot during national camps about English football, other players in the Premier League and he told me very positive things.

"He said it's faster and stronger football, that I need to be adapt and I need to wait some months before I get my chance. He said when I get it, to make sure I take it. He said that it's a big, big club - one of the biggest in England.

"When I first heard Liverpool wanted me, I called Nemanja, Lazar and Aleksandar Kolarov and they all told me, 'You need to sign for them'.

"Three different players all saying the same things - two who play for big rivals - it shows that they know what Liverpool means in European football."