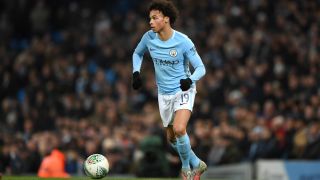 Sane suffered ankle ligament damage in a tackle by Joe Bennett as the Premier League leaders won 2-0 at Cardiff City in the FA Cup on Sunday.

Guardiola initially indicated Sane would be out for "a while", with City unable to confirm a timescale in a statement released on Monday.

But in a news conference on Tuesday, Guardiola said Sane will be out of action for a substantial period, ruling him out of City's Wembley date against Arsenal on February 25.

"He's injured," Guardiola told reporters. "It will be six or seven weeks out."

As well as the EFL Cup final, Sane will miss City's last 16 Champions League tie against Basel, with the first leg scheduled for February 13 and the return match at the Etihad Stadium on March 7.

Bennett apologised for the tackle, which forced Sane into a half-time substitution, but after the cup tie Cardiff boss Neil Warnock suggested challenges from his players were par for the course in English football.

Asked to respond to Warnock's comments, Guardiola could not agree with the 69-year-old's assessment.

"He has more English football experience than me so if he says that, what can I say," Guardiola added.

"But Neil has more experience than me. He has had all his career here."