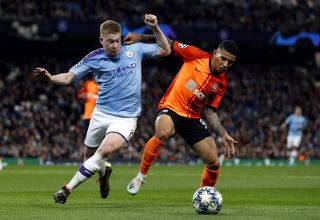 Pep Guardiola admitted Manchester City would need to improve as they secured their Champions League last-16 place with a dull 1-1 draw against Shakhtar Donetsk.

The Premier League champions failed to spark at the Etihad Stadium as Ilkay Gundogan’s second-half strike was cancelled out by Manor Solomon.

But the result was still enough to seal top spot in Group C and put City into the knockout stages for a seventh year in succession.

“Now this competition in February will be completely different, tougher,” said City boss Guardiola. “We’ll see in which conditions we arrive there. This competition is about the details.”

City controlled possession as they took on the Ukrainian champions for a sixth time in little more than two years.

Yet there was no repeat of their 6-0 thrashing of Shakhtar at home a year ago as the visitors, still hoping to progress themselves, proved resilient.

They even created a number of chances themselves with what looked like a plan to play balls over the top of City’s defence but were unable to take full advantage.

Gundogan finally broke the deadlock after 56 minutes but Solomon finished off a slick move 13 minutes later and Shakhtar held on for the draw, although City’s David Silva had a shot cleared off the line.

“In the second half I saw good things and things we have to improve,” Guardiola said.

“But of course we’re in the next stage and that’s the most important thing when you start the group stage.”

Qualifying with a game to spare takes the pressure off next month’s trip to Dinamo Zagreb but Guardiola will not take the game in Croatia lightly.

With Dinamo and Shakhtar still competing for second place in the group, Guardiola feels obliged to field a strong side.

“If we need someone in Zagreb then we’ll use the first team. It’s the Champions League, it’s prestigious,” he said.

“We’ll travel with the intention to win. Of course always you need a you need to have a sense of urgency to take the result and win the games, but out of respect for Shakhtar and Atalanta we have to do that.”