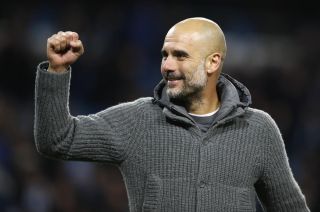 Pep Guardiola insisted he is ready to accept any punishment UEFA may hand Manchester City for alleged breaches of Financial Fair Play regulations but reiterated his trust in the club’s hierarchy.

City’s celebrations following last weekend’s title triumph – and their build-up to Saturday’s FA Cup final against Watford – have been overshadowed after the club were on Thursday referred to the European governing body’s adjudicatory chamber over the matter.

City issued a statement to say they were “disappointed, but regrettably not surprised” by the news, with a future ban from the Champions League one of a number of possible punishments now facing them.

The Premier League champions say they are “disappointed but not surprised” by the decision and claim they will be completely exonerated #MCFChttps://t.co/CiQloLBCdn— PA Dugout (@PAdugout) May 16, 2019

Guardiola said he could not predict what will happen but insisted his faith in the club was undiminished.

“Right now I know the people are waiting for us to be guilty but we are innocent until it is proven.

“I spoke with the chairman, with the CEO, I know exactly what happened, exactly what they did and I trust a lot of them. That’s all.”

With such a punishment perhaps hanging over the club, rumours consistently linking Guardiola with the soon-to-be vacant position at Juventus could carry more weight but the Catalan insisted he would see out the two years remaining on the contract extension he signed a year ago.

“I’m satisfied working here with this club, with these people here and I’m not going anywhere. This is what I feel today.

“But football changes a lot, results can be not good next season and maybe next season will not be good. But next season I’m manager of Man City. I’ve said many times.”

Financial Fair Play is not the only off-field issue to have hit City this week. Following Sunday’s decisive win at Brighton a video emerged which appeared to show players singing a song about Liverpool fans being “battered in the street”.

Guardiola insisted the video had been misconstrued.

“Do you think someone can just for one second imagine we could offend about what this tragedy is about? All the Liverpool people?” he said.

“It’s incredible. We were happy for ourselves. If someone was offended for another issue, I’m sorry, I apologise. But this was never our intention.

“We celebrated for ourselves. We were happy to win the Premier League against an incredible contender.”

Amid all the distractions, Guardiola must keep his side focused on Saturday’s final against Watford and the chance for an unprecedented domestic treble in the men’s game.

City are unsurprisingly strong favourites against a Watford side who finished 11th in the Premier League.

PEP 💬 Hopefully we can celebrate the FA Cup Final, the Premier League, the Carabao Cup and the Community Shield, on Saturday and especially Monday with our fans and the people.— Manchester City (@ManCity) May 17, 2019

“We won the most incredible Premier League ever and we are satisfied, we celebrated for a short time and then it’s back to business,” Guardiola said.

“We focus on Watford. I know how difficult it was to play them here, their quality up front. (Troy) Deeney is almost unstoppable, maybe the best striker with long balls. (Etienne) Capoue is box-to-box.

“We spoke about their players. Hopefully we can stay focused for one more day and be champions of the FA Cup.”